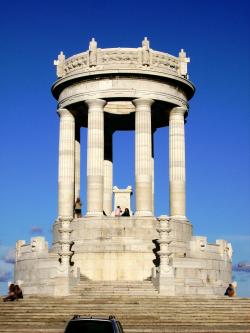 Ancona is an italian city with 100.261 inhabitants. It is the administrative centre of the province of Ancona and of the Marche region.

It overlooks the Adriatic Sea and it has got one of the biggest italian harbours. It is a city of art, with an historical down town full of monuments and with a thousand years old history; it's one of the most important economic centres of the region and the biggest town in dimensions and population.

Towards the sea, the town is on a bent elbow-shaped promontory , which protects the largest natural harbour of the central part of the Adriatic Sea. The Greek people from Siracusa who founded the city in the 387 b. C. Noticed the shape of this promontory and for this reason, they named the new city Ἀγκών, "ankòn", which means “elbow” in greek. The greek origin of Ancona is remembered in its epithet : “the Doric city”.

According to some statistical studies, its metropolitan area regards from 280.000 to 350.000 inhabitants. 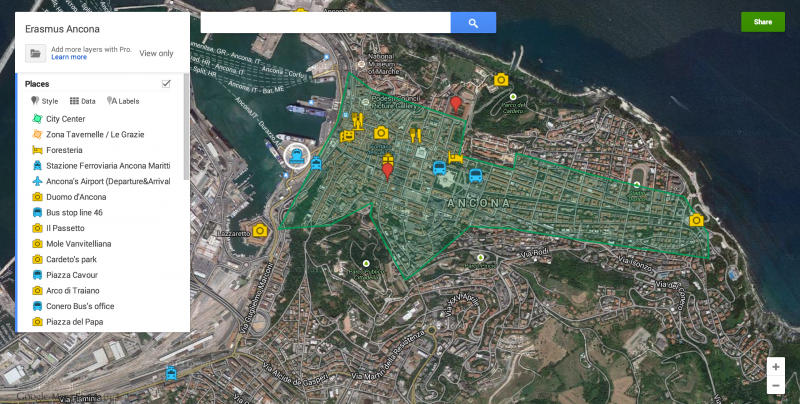 An important event for the city, in the first postwar decades has been the establishment of the university, with the opening of the Economics faculty in 1959, subject of the Urbino University; among the founders there was also the famous economist from Ancona, Giorgio Fuà. During the years, were added the faculties of Engineering, Medicine, Agriculture and Science.
The University of Ancona in 2003 changed its name in University Polytechnic of Marche. In 1967 Giorgio Fuà founded the Superior Institute of Economic Studies Adriano Olivetti (ISTAO) for the professional and advanced education of the managers in the economic management of the companies.

A reason of pride has been the visit in the city of Her Majesty Queen Elizabeth the II of the United Kingdom, on May the 5th 1961.
Among the events of the last two decades of the XX century, we can find:

In 2001 the big Park of Cardeto was inaugurated. It offers to the citizens the possibility to walk along the cliffs of the high coast, in 35 hectares of lush greenery and ancient historical proves. The park represents the recapture of the eastern part of the city promontory by the citizens, it was militarized in 1860. in 2005 it was inaugurated the Park of Belvedere, 15 hectares of greenery in the marginal and panoramic zone of Posatora, which represents the positive passing of the emergency of the landslip in 1982. On October the 13th 2002, the theatre of Muse has been opened again, it was closed since the bombing of the Second World War damaged its roof. The reopening of the theatre has soon assumed the significance of the cultural rebirth of the city. In 2007 the central Corso Garibaldi has been definitely closed to traffic; so, it has been created a wide pedestrian area in the down town.

In 2008, in the “Cittadella” is settled the prestigious seat of the permanent Secretariat of the Adriatic-Ionic initiative, an important ministerial structure of coordination among Italy, Slovenia, Croatia, Montenegro, Serbia, Albania and Greece, which was created after the “Declaration of Ancona” on May the 20th 2000.

From September the 3rd to the 11th 2011, the 25th the National Eucharistic Convention has taken place in Ancona, with the visit to the city by the Pope.

In 2013 Ancona has celebrated its 2400 years of existence, since the Greek foundation.

How to get to Ancona?

The closer airport from Ancona is in Falconara Marittima (Aeroporto Internazionale Raffaello Sanzio di Falconara) and it only 20 Km from the city center. You can travel from here in several country: